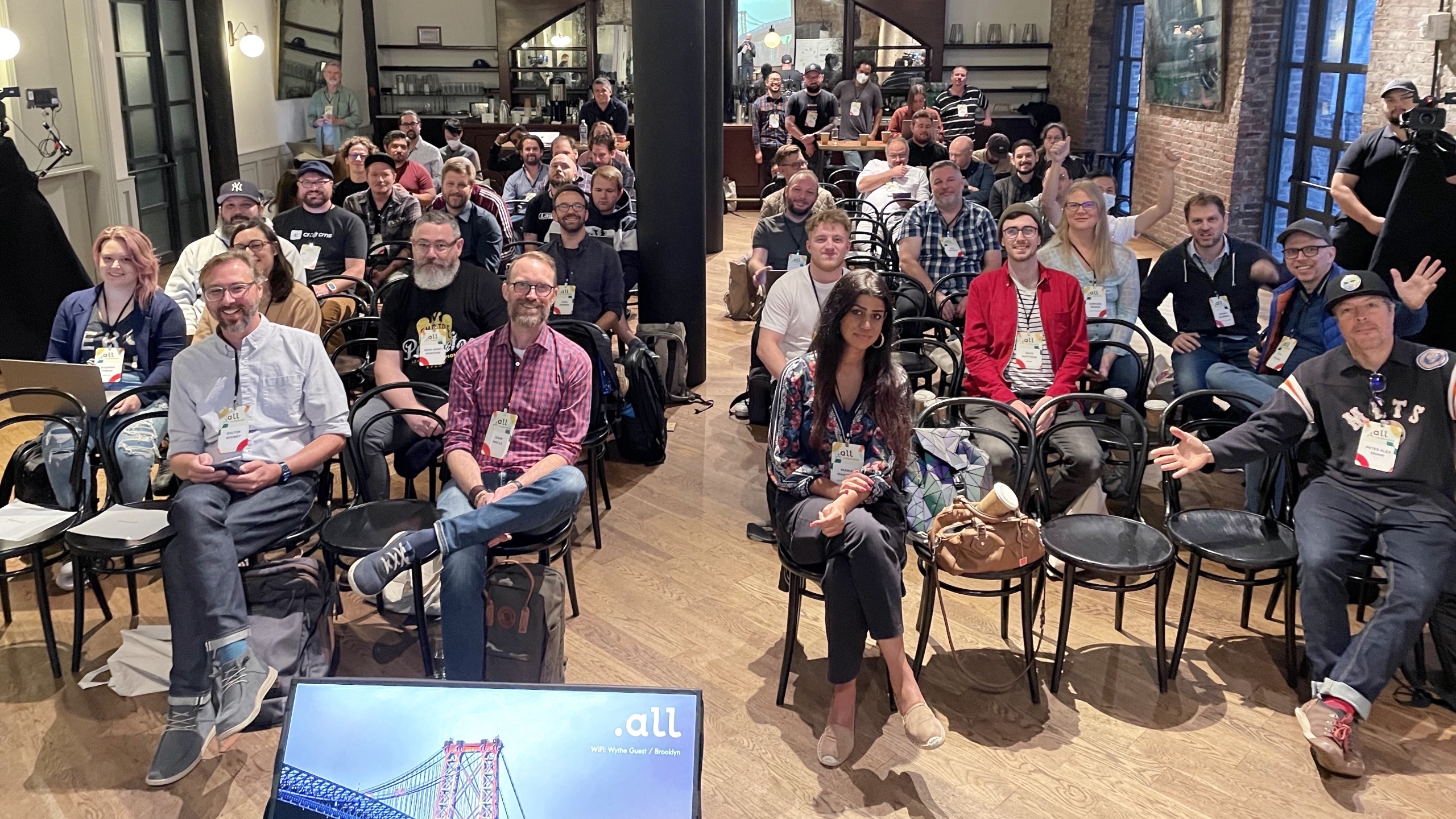 Dot All 2022, the official Craft CMS conference, took place in Brooklyn, New York (USA), from September 27 to 29, 2022. The Craft community reunited in person for the first time in three years. I could not attend the 11 speeches and two workshops in person because the travel to North America was too time- and money-consuming for me.

Unfortunately, I was not the only one who did not take advantage of the offer because there were significantly fewer participants than in previous years. The reasons for this are probably manifold. On the one hand, conferences are currently having problems attracting enough people after the long pandemic break. On the other hand, the expense of time and travel in such a challenging year for the economy is also not to be taken lightly. The fact that the program was scaled back may have also left some people feeling a little letdown. For instance, three workshops and 18 to 19 lectures were still offered in 2018 and 2019. Perhaps there was also a lack of better marketing in advance to attract more people from the target group.

On the plus side, a smaller conference is perfect for meeting new people or reconnecting with old ones. One of Craft's greatest strengths is its community, and it's wonderful to see how true friendships have grown throughout the years. Some of the participants have been friends since ExpressionEngine's early days. Even though it is nice to have a "class reunion," it was apparent that the younger generation was slightly absent.

So many young engineers today learn JavaScript frameworks like React or Vue first, so dealing with content management systems isn't exciting enough compared to creating fun JAMstack apps. This is a widespread issue in the PHP community. It will be interesting to see how Craft CMS will open up to this audience through better marketing and developer experience.

As is tradition, the event was opened by Brandon Kelly, and he first gave a comprehensive update on the current state of Craft CMS. Kelly welcomed attendees and revealed that Pixel & Tonic's staff had expanded to 17. It's encouraging to see that the company has recently filled such personnel voids after losing essential workers like Andris Sevcenko and Matt Stein. Iwana Just from the UK will begin this month, while August Miller from Portland and Brian Hanson from Chicago started their jobs in August. Matt Stein was replaced by August, who now manages documentation and educational resources. Brian and Iwana have a focus on the further development of Craft CMS.

Unfortunately, Pixel & Tonic no longer provide exact numbers about the successes of Craft and the ecosystem, even though craft sales, profits, and revenues continue to rise. On the other hand, Craft 4's adoption rate has been highly positive. Craft 4 is installed on more than 60% of new installations and 46% of the most recently updated ones. Additionally, 87% of plugins with over 1,000 installs each are available for Craft 4. Therefore, the most recent Craft version can be used with the most common plugins.

Following that came a rundown of Craft CMS 4's key features, covering everything from the Condition Builder to accessibility and address field type. Regarding accessibility, Pixel & Tonic is well on achieving WCAG AA 2.1. For example, Lupe Camacho - Accessibility Engineer at Pixel & Tonic - conducted a comprehensive audit and found over 500 issues that needed to be fixed.

The upcoming release of Craft 4.3 will enhance the element index UI and accessibility. For example, a view that allows authors to modify the visible table columns will be added.

Additionally, Pixel & Tonic will release a new Shopify plugin that synchronizes Shopify products as elements in Craft, complete with custom fields and relationships. Excellent choice, as Shopify, is a well-regarded business, and with a good connection to Craft, new customer groups will be addressed.

Craft Console, a replacement for the Craft ID customer interface, was announced at the digital Dot All 2021. What we saw back then were only Figma components, but in the meantime, it is an actual product that is still scheduled for release at the end of 2022. Craft Console will allow Craft CMS and plugin licenses, plugin store entries, and partner profiles to be managed through organizations. The organizations are said to be similar to those of GitHub, so an organization is a group of several individual accounts.

Craft Cloud was first announced at Dot All 2019 and was initially intended to be a headless craft service that would have launched in 2020. Unfortunately, this product bypassed the community, which criticized it after its unveiling. Pixel & Tonic took this on board and went back to the concept stage to reboot. Instead of being limited to headless Craft, Craft Cloud will be a one-size-fits-all service for headless and hybrid Craft sites.

Craft Cloud is scheduled to launch in 2023.

The final version of Craft 5 will launch in Q4 2023, but what new features can we expect? Because development on the 5 release started only recently, Brandon Kelly could present more ideas and concepts instead of meaningful demos.

However, the historical review was interesting:

Since Craft CMS 2.0, Pixel & Tonic has focused on improving authoring experience (AX) and developer experience (DX). Content modeling has been left out, and that's exactly what's changing with Craft 5.

The following major new features have been announced:

The Dot All 2022 conference was a success. A little smaller than usual, but once again really well-organized, according to attendees. Being a member of this community is fulfilling. Thankfully, the product is likewise excellent.

I want to applaud the fact that the talks were broadcast live for the first time. Anyone who paid the required $299 ticket could see everything live, even if they didn't want to come to New York. I am aware that streaming requires technical expertise and is, therefore, expensive. But I think the $299 is too much money.

A streaming ticket for the Beyond Tellerrand conference in April 2023 is also available for just 99 euros. Naturally, this low price would have been perfect for Dot All 2022, but even a range of $149 to $179 would have been pretty appealing. In around four weeks, all of the talks will be available on Vimeo for anyone who doesn't want to invest any money.

Pixel & Tonic's announcements were good overall. However, Craft Cloud and Craft Console were already big topics last year. We now have a more detailed feature list of Craft Cloud, giving us more clarity. A detailed demo would have been desirable. But the service wasn't ready for that yet, although craftcms.com is now running with it.

That Craft 5 will be all about content modeling is excellent news. In 2013, Craft CMS was second to none in terms of content modeling and authoring experience. However, competing systems eventually caught up to or surpassed Craft. For instance, Statamic has improved on a few things in the UI alone, and the Bard field is a significant asset to the system. Verbb has taken a similar approach with Vizy and developed a great plugin, but I think the core experience of Craft needs to be improved. Kudos to Pixel & Tonic for wanting to tackle this area after all these years, even though it became clear that they may only be in a concept phase. The drafts shown still seemed very much work-in-progress, and I think that with the unified content view, for example, they don't even know how they will solve all the problems that arise. As an observer, I wondered what, for instance, this view would look like when you have hundreds or thousands of posts. Is this view the only way or just optional? Also, I am convinced that the finished UI will look much better than the draft shown.

Matrix-in-Matrix has been requested since late 2013 and was only planned for Craft 3, then was supposed to come with Craft 4.0, only to have it postponed to Craft 4.X. Now we know that this function will only come with Craft 5 and then differently than thought, namely as a new field type. Brandon Kelly has explained in detail why they had no solution for the performance problems that can arise within a nested matrix until now. Using a complex nested matrix on a multi-site with ten sites could expect over 2,700 saves, which would negatively impact performance. Therefore the team approached this problem the last years and brought with Craft 3.4 delta-saves into the system. Since 3.7, these were even made recursive. Craft 4 introduced "Shared block custody", whereby the elements are no longer a 1:1 mapping of the matrix block when saved. With the introduction of the new field type in Craft 5, there should then be no more performance issues.

But what about the UI? Nested fields are displayed as cards, like the address field introduced in Craft 4. In this state, the contents can only be read; after a click, they can be edited in a slide-out pattern. Interesting concept, but again I'm waiting for a demo that shows nested fields and how usable that will be in reality.

I don't want to leave unmentioned practical innovations like decoupled entry types, portability of entries, or that categories and co now become entries.

If Craft 4 looks like a Craft 3S update from the outside, Craft 5 is obviously a giant leap forward. I do not doubt that the Pixel & Tonic team will come up with a mind-blowing solution to the concepts. As they recently demonstrated in 2013 with Craft 1.3. After ten years, Craft 5 might bring about the next great change in content modeling.