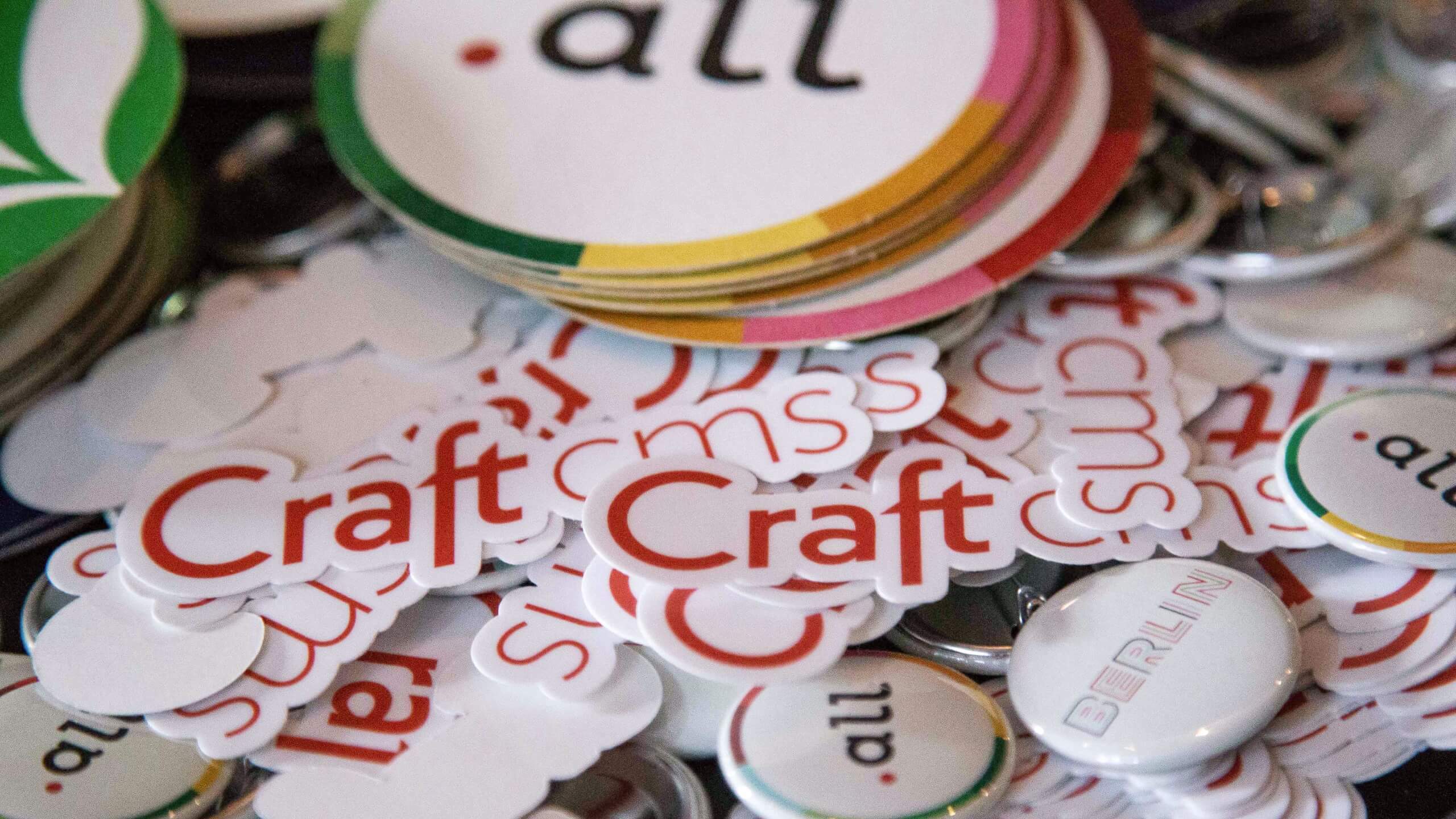 From September 26 to 28, 2018, the official Craft Conference took place in Berlin. As the operator of Craftentries, I had to be there this time. The friendly community and exciting lectures made the trip worthwhile.

For the first time, I made the trip to Berlin and had terrible luck with Deutsche Bahn. Instead of comfortably taking the ICE from Cologne to Berlin, I was already informed in Cologne that my ICE was canceled... locomotive damage, or what do I know. My seat reservation was thus invalid, and I had to switch to a later train, like all the other passengers from my actual train, and accordingly crowded was the train ride. In the end, I had to stand for most of the several-hour train ride, which meant that I had blisters on my feet in the evening and had to survive the following days of the conference with them.

My return trip went only minimally better since I had to stand only half the train ride there, but that's another story. 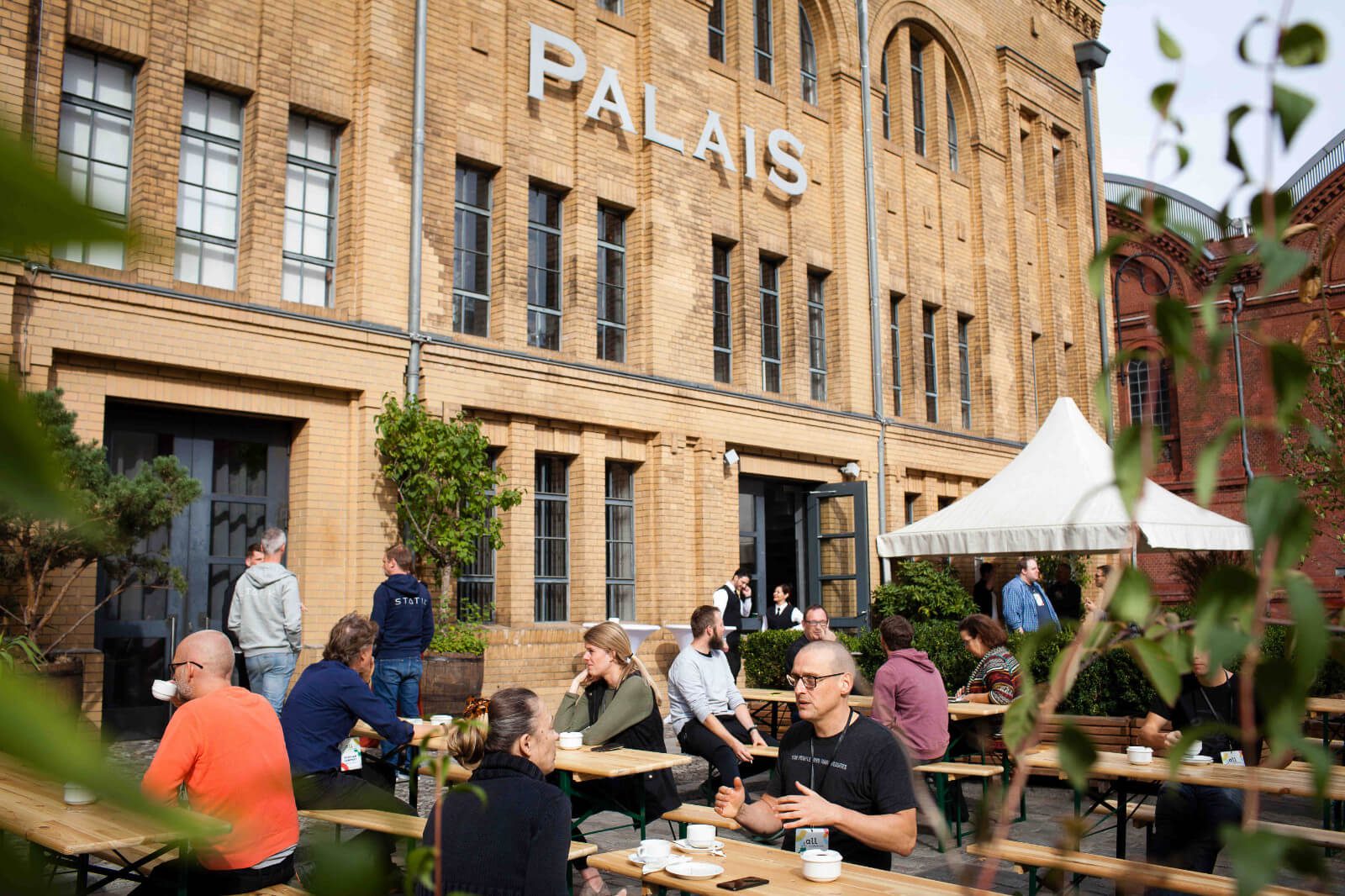 The actual conference took place in Berlin, Prenzlauer Berg in the Palais Kulturbrauerei. Fantastic location - it was an old brewery with lots of industrial charm. The roof terrace and courtyards were very chill. A supermarket and a Gravis store were on the premises or directly next to it. I looked at the latest Apple products with David Hellmann and Frederic Köberl, both from the Austrian web/marketing agency Fredmansky.

We usually formed a small group and secured seats during the presentations with the two of them and Dennis Frank. I also got to know Johannes Arndt from webhub and Oliver Stark from fortrabbit. It was also lovely to meet helpful people from Craft Slack like Robin Schambach.

Of course, I didn't just network with people from Germany and Austria. It was the first opportunity to meet the Craft developers and other people from the international community, whom I knew either only through Twitter, Slack, or email. I had the least to do with Brandon Kelly in Berlin, who was understandably too busy. Too bad, because I emailed him a long time about the idea and naming of craftentries.de, back in the days. I talked to Brad Bell, Chief Technology Officer of Pixel & Tonic, daily.

Together with John Henry Donovan, who I know virtually from the ExpressionEngine days, Jake Dohm, and others, Berlin pubs were tested. On the first evening, I sat with Ben Parizek from Straight Up Craft and Sprout Plugins for about 2 hours. We talked about Berlin, Craft CMS, his plugins, how business is going for us, how he got started with Straight Up Craft, the community, and all sorts of stuff. At the workshop I attended, I met Katie Fritz, a speaker at the event herself, and she spoke some German.

In the end, I met and had conversations with even more crafters than I have listed here. It was all wonderfully relaxed, educational, and fun. Perhaps that's also the advantage of the relatively small community, and you either know each other or get to know each other quickly. It also helps that with Craft CMS there was virtually only one topic and thus identical interests. 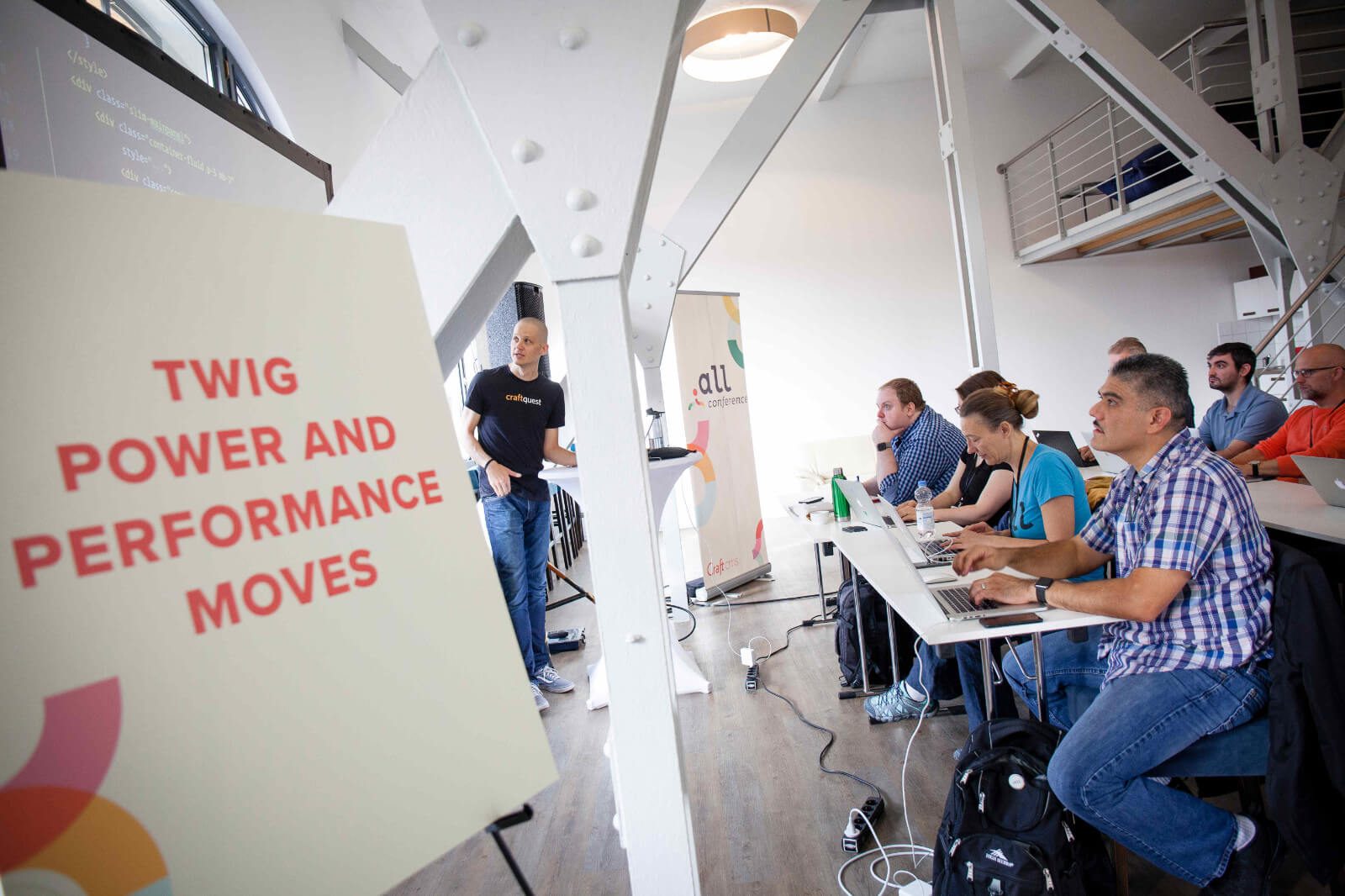 Let me say up front that the presentations and speakers were excellent. You had to pay extra for the workshops, and Application Development with Craft 3 with Brandon Kelly, Craft Commerce Workshop with Luke Holder, and Twig Power and Performance Moves with Ryan Irelan to choose from.

I attended the Twig workshop with Ryan because I could benefit the most from better Twig templating for my current day-to-day business. Also, I've known Ryan virtually since 2009/10 or so; thanks to his ExpressionEngine videos and eeinsider.com, I learned ExpressionEngine back then. And his video courses on Mijingo.com and craftquest.com, respectively, helped me a lot with Craft. In the end, I wasn't disappointed either; some constructive tips regarding the efficient use of Twig I could take away.

It was no different from the regular lectures. I admit that the PhpStorm talk by Jetbrains was a bit too much for me; I'm not enough of a PHP programmer for that.

In Prioritizing Author Experience, Katie Fritz vividly demonstrated why I love using Craft in client projects. I can completely customize the user experience of the editors so that, on the one hand, it is fun to edit the content, but on the other hand, this works quickly without a long training effort. In a similar vein was Souvik Das Gupta's Architecting a Content Website talk, which I can recommend.

Paulo Elias whetted my appetite for React and Headless CMS with Modern Frontends Using Craft CMS, React, and GraphQL, both of which were subliminally discussed at the conference. So I also talked with Benjamin David from Pixel & Tonic, who told me about the plans that Craft's control panel would later be realized entirely in Vue. So it will be worthwhile for Craft developers to deal with topics like React or Vue.

Andrew Welch from NYStudio107 did not disappoint live on site, was greeted with applause, and spoke for once, not about SEO. Still, on the topic of Making a Craft CMS Website That Flies, every participant will indeed have gotten some tips for performance optimization.

The other presentations were also engaging, for me, more for inspiration. I still have to catch up on a few myself in video form. 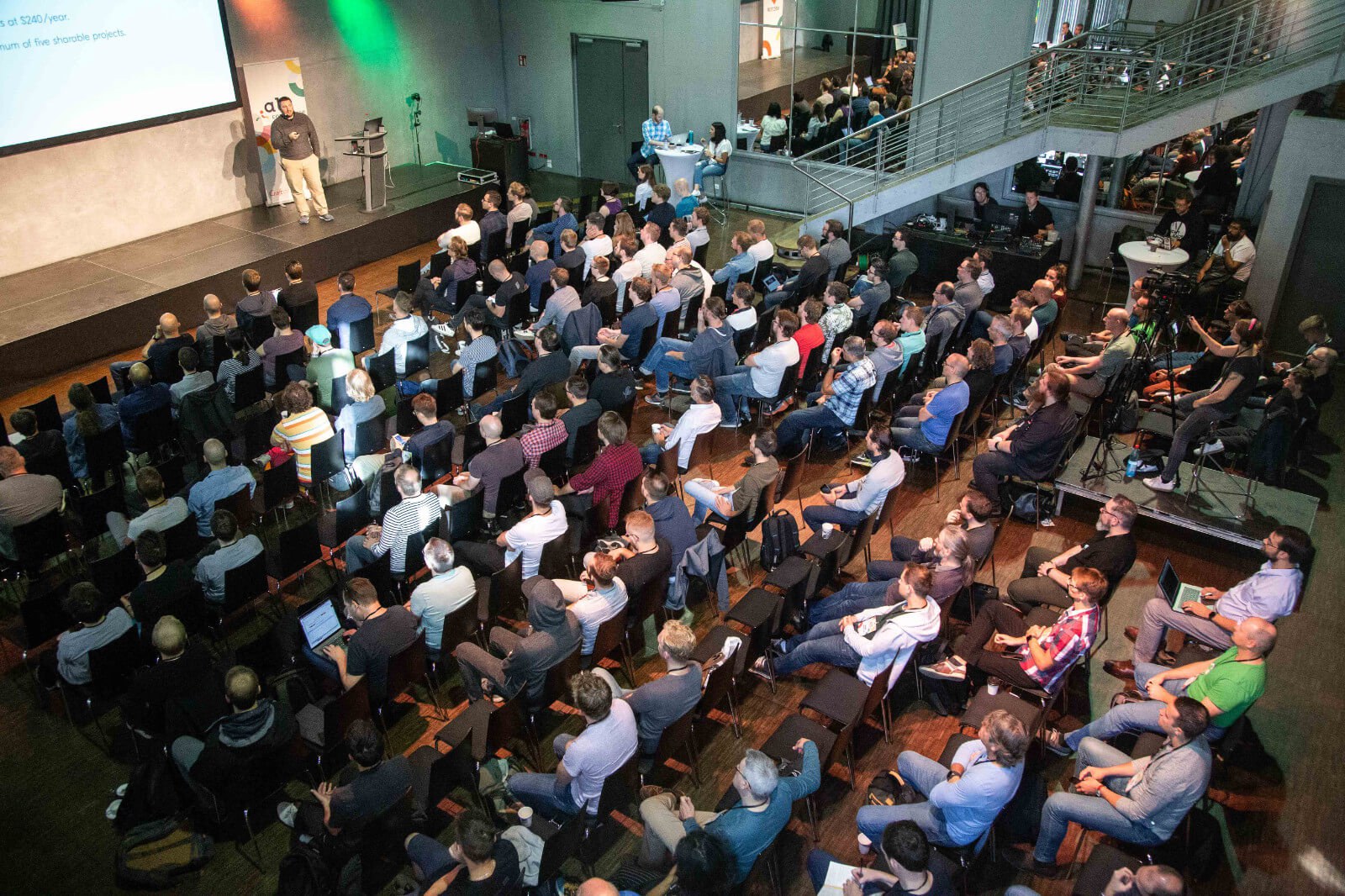 The highlight on the last day was, of course, Brandon Kelly's State of Craft 2018. And it almost felt like an Apple keynote for Craft CMS, even if there were no big surprises or new announcements.

The partner program has been introduced. There will be a partner section on the Craft CMS website, where developers and agencies offering Craft services will be presented.

The Dot All was the first developer conference I attended, so I don't have any comparisons. But the talks were inspiring, the location beautiful, and the people from the community friendly and helpful. It was a great experience to finally meet people in person, some of whom you have known for years. Networking is one of the main reasons for such an event, because you don't learn anything from a technical point of view, or at most in the workshops. If you are only interested in the lectures, I recommend waiting until they are published in video form for free.

Berlin as a guest was interesting, but I would not like to live in such a big city. My hotel in Prenzlauer Berg was great because I got a free upgrade, so I could also work at my desk and record a podcast episode. In addition, it was only a few minutes walk to the conference.

Whether these enjoyable days, 899 US dollars incl. workshop plus travel expenses and hotel, are worth it is something everyone has to decide for themselves.

By the way, the next Dot All will take place in Montreal.