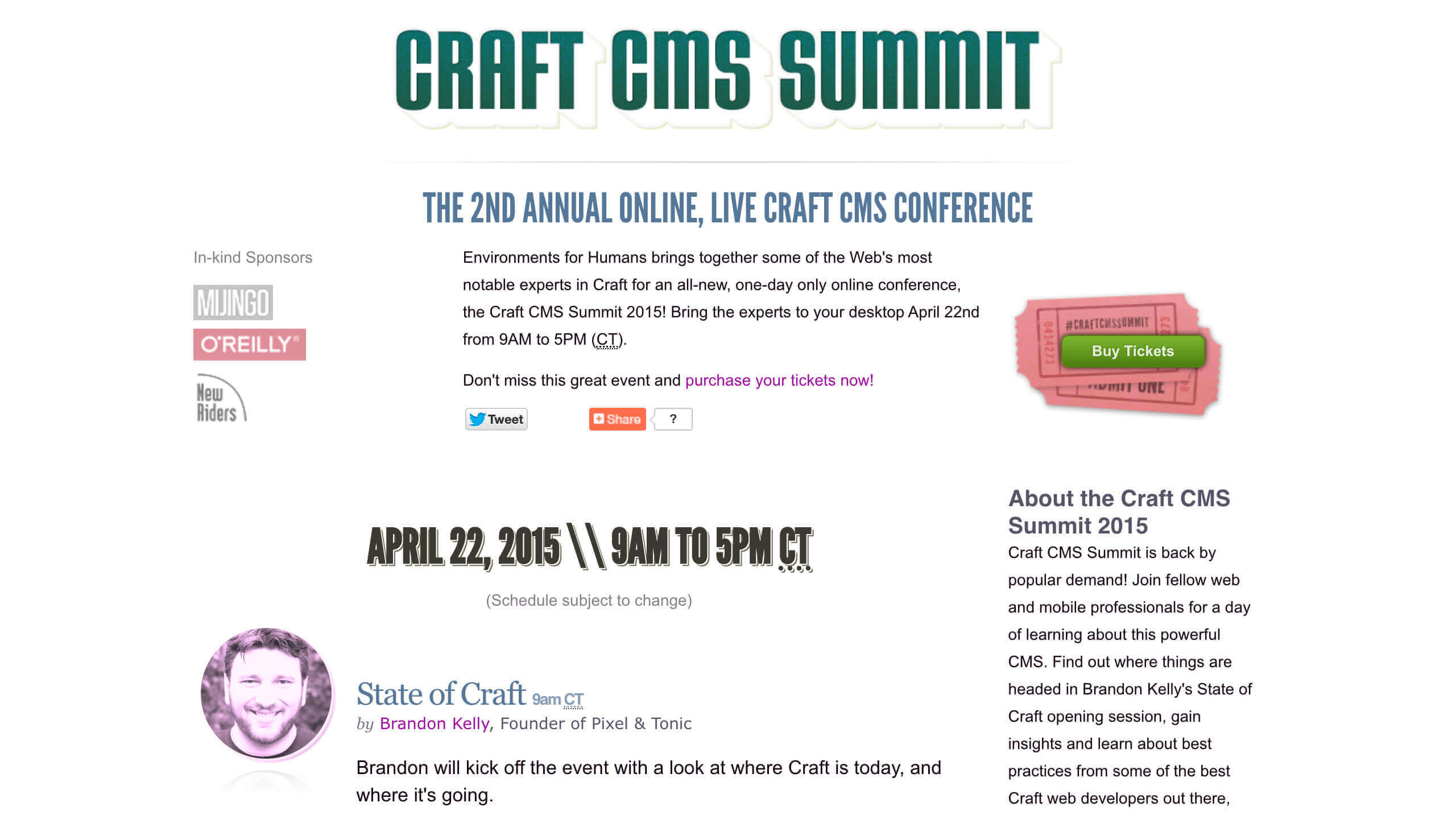 On April 22nd, the digital event Craft CMS Summit 2015 took place. Last year I already participated in the Craft CMS Summit and was thrilled. I learned a lot and even changed my craft workflow because of it.

The 2015 edition was also very interesting, super organized, and moderated by Christopher Schmitt (Environments for Humans).

Once again, Brandon Kelly, founder of Pixel & Tonic, opened the event with a presentation on the current state of the Craft ecosystem.

There are currently 260 plugins listed on Straight Up Craft. On craftcms.stackexchange.com, 1,500 users are registered after ten months, 2,600 questions have been asked, and 96% of them have been answered. The community has embraced feedback.buildwithcraft.com, with 230 voters and 120 ideas submitted. Relatively new is Craft Slack, which 350 people use after one week.

Accordingly, Pixel & Tonic has increased revenue and doubled its team size. With Brandon, Brad, Andris, Ben, Aaron, and Jeroen, six employees are working on Craft CMS from development to support.

During Craft Summit 2014, the first demo of Craft 3 was shown, and an official plugin store was announced. The latter is not online until today, and also, regarding Craft 3, it has become quiet.

The Craft 3 roadmap is divided into three phases:

In phase 1, there are no changes to the control panel or other visible differences. The finished version should have a plugin store integrated.

You can look forward to the following seven innovations:

In a complete surprise, Brandon introduced Luke Manly Holder, the seventh Pixel & Tonic employee. And this was for a reason, as Luke was working on an e-commerce plugin called Market Commerce for Craft, and Pixel & Tonic took over the plugin and hired Luke to turn it into Craft Commerce.

We made a big splash today at the Craft CMS Summit: Pixel & Tonic has hired Luke Holder, and we have acquired his Market Commerce plugin! - Pixel & Tonic

Craft Commerce is expected to become a complete e-commerce solution for the craft ecosystem with products, variants, orders, discounts, taxes, shipping, and support for the largest payment service providers.

I am excited to begin working with P&T on Commerce. I've worked hard to get the plugin where it is today, and by joining P&T, it's going to be even better. - Luke Holder

Joel Bradbury's talk went into the depths of Craft CMS and how you can create functional and complex workflows on the front end while Craft does the hard work.

Megan Zlock from Viget showed how to use Matrix to build websites with easy-to-maintain components. The final focus was on how to realize templates with partials, components, and macros according to the DRY principle.

Marion Newlevant gave an introductory course in Twig, from syntax to variables to control structures. She also clarified when to use Extends, Includes, Embeds and Macros.

Aaron Berkowitz from nclud showed in his presentation what possibilities there are for content management with Craft.

The focus was on:

He used Walt Disney World as an example. This way, the content types could be broken down into attractions, locations, and recommendations. He showed the various relationships among each other, including the field list, in corresponding diagrams and assigned them to the different section types.

Adam McCombs devoted his presentation entirely to the Craft CMS plugin ecosystem. Currently, more than 260 plugins have been released by the community, and he has contributed four of them - Casper, Lemmings, Craft Nav, and 404 Finder.

Adam didn't miss the opportunity to present 20 plugins from other developers and how they make working with Craft easier.

He then gave tips on programming your plugins and what to pay special attention to. The differences between the regular MVC model and Craft's were also highlighted.